A true treasure: The Book of Figures Of Hermes

I've come across this following manuscript completely by accident, and what a wonderful accident it was.


The Herzog August Bibliothek in Wolfenbüttel uploaded many of its manuscripts, among which is this beauty: Cod. Guelf. 30.1 Aug. 4°

The catalogue entry lists it as 17th century (certainly agreeing with the reign of Rudolf as a Holy Roman Emperor , 1776-1612) but most likely of a later redaction.

The text is so far largely inaccessible to me due to language and script, except for a few more legible parts.

The drawings are exquisite: 69 figures, mostly antropomorphic, with a very well rehearsed line in ink, with characters and names on their foreheads and chests.

These are astrological images, inherited from the Arabic tradition, which are to be either drawn, either constructed of other materials, unde clearly indicated astrological times, to obtain specific results. 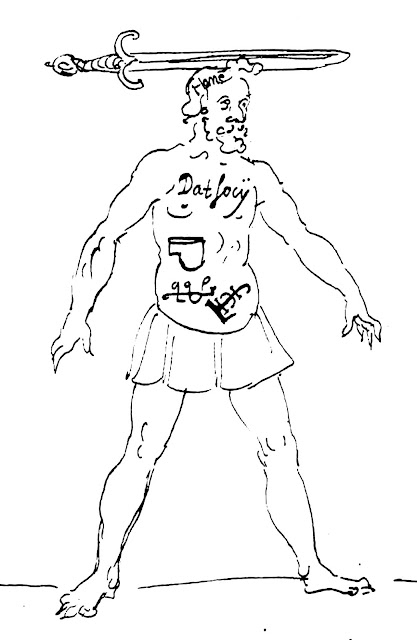 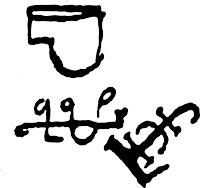 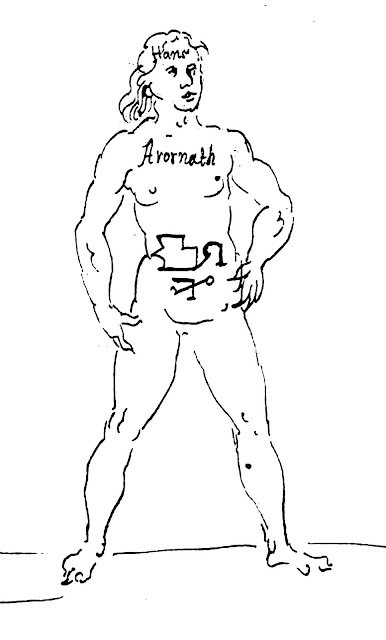 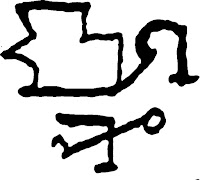 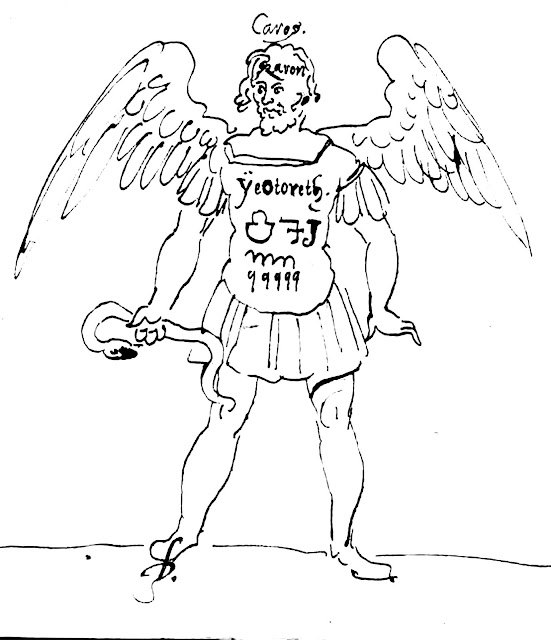 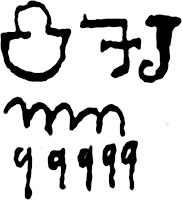 Other manuscripts, more or less complete:

Darmstadt Hs1410: 54r -66v  Translated from Arabic by ”Robertem Castrensem”, Robert of Chester, active in Spain in the kingdom of Navarre in the 1140s.


Posted by Mihai Vârtejaru at 18:04 No comments:

The volume Nigromantisches Kunst-Buch (A Nigromantical Manual) was published by Georg Konrad Gsellius in Köln in 1743, at Peter Hammer`s publishing house. We cannot rule out that the author and year of printing is as real as the fictitious Peter Hammer. A translation of this work was recently published by Enodia Press, but since I do not possess it yet, I cannot make any statements that could have been covered by the publisher's preface.

I have chosen to bring this work to the public's attention both for furthering the editorial efforts of the good people of Enodia Press, but also to present these little known seals.

Although the book is abundant in such elements, I will only reproduce the planetary characters, with the hope that I will be able to find their sources in the future.

The first set of planetary characters is problematic, containing errors, and being presented in a vertical table. I have done my best to rearrange them horizontally for practical reasons and clean them to the best of my abilities.

The second set is complete (the main reason I choose to present it first), the characters being associated to the days of the week and enclosed in double circles. This shape makes us think that they were meant to be either engraved as medals (like Paracelsus or Arnold of Villanova) or made into rings (such as the images of Belenus). The order, as well as multiple instances of the hexagram, would indicate a Jewish oririgin. 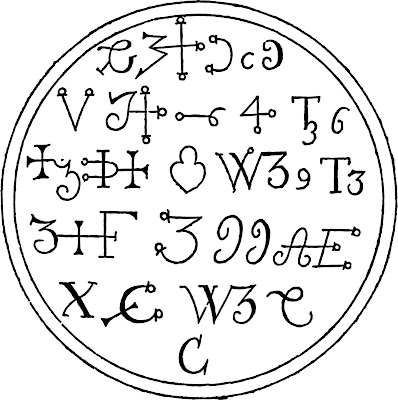 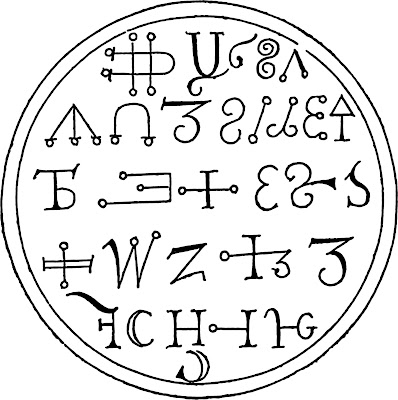 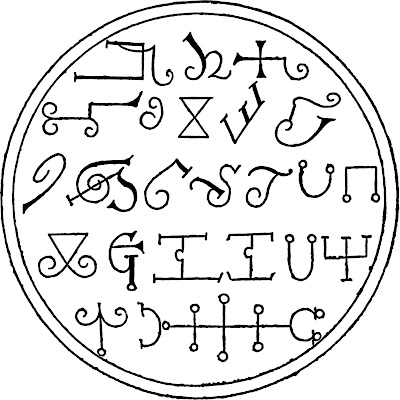 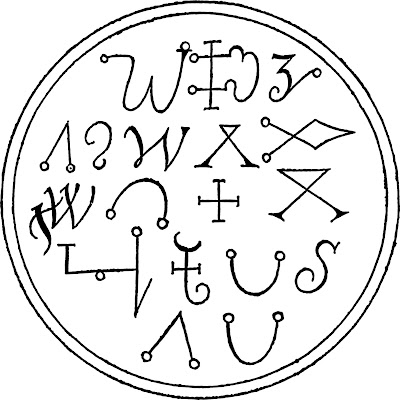 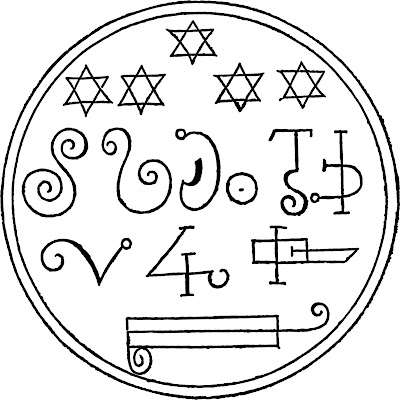 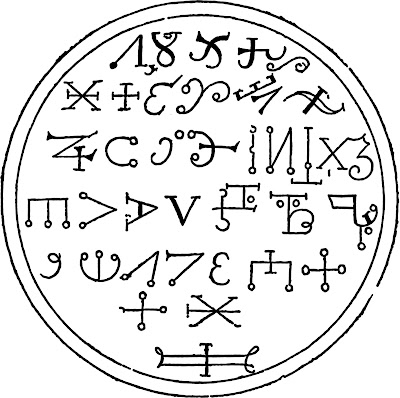 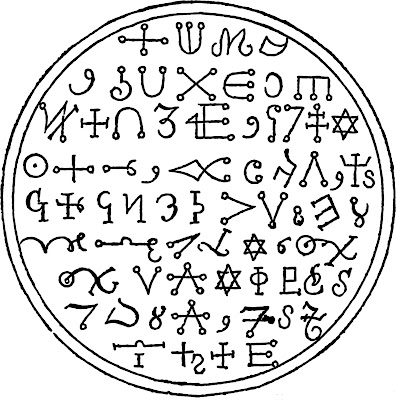 II. Characters of the Planets

1. Characters of the Sun

2. Characters of the Moon

4. Characters of Mercury missing.
Due to mislabelling, the missing characters seem to be those of Jupiter or Saturn.

5. Characters of Jupiter.
Quite possibly a misabelling, the final character is Venus.

6. Characters of Venus.
Quite possibly a misabelling, the final character is Mercury.

Posted by Mihai Vârtejaru at 12:56 No comments:

The books presented in this series are bought exclusively from Patreon donations. Thank you. 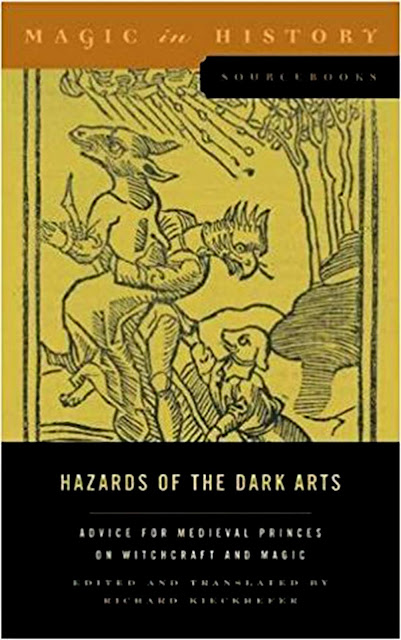 Although the title is somewhat general, Richard Kieckhefer brings us two very important treatises aimed at the education of princes: Johannes Hartlieb`s "Book of All Forbidden Arts" and Ulrich Molitoris "On Witches and Pythonesses".

Largely forgotten but nevertheless an intellectual force of his time, Johannes Hartlieb is one of those cleric advocates against magic and witchcraft, whose vast knowledge in the field makes us wonder, much like in the case of Abbot Trithemius, if he was a closeted practitioner of the arts he publically denounces. His treatise is dedicated to the Margrave Johann of Brandenburg and seems an unfinished exposition of certain species of magic that was never carried out in full.  Each book discusses seven magical disciplines, more or less accurately, with high empasis on divinatory practices: Nigramancy (calling forth demons and dead people), Geomancy (casting lots), hydromancy (divination and magical experiments by water), aeromancy (the same, involving air), pyromancy (fire), chiromancy (the study of the hand) and spatulamancy (divination via examination of a shoulder blade bone).

His work is also important for citing contemporary works on magic, much like Trithemius in his Antipalus Malleficarum: The Seal of Solomon, The Key of Solomon, The Hierarchy, Shemhamphoras, Kiranides, De annulis inpensis of Pseudo-Arnaldus, The Consecrated Book, The Ars Notoria, Liber razielis, Picatrix, The Book of the Holy Three Kings and The Book of Lots of Pythagoras.

Hartlieb`s attitude towards these discipline is skeptical and rooted in logic, doubled by ecclesiastical maledictions. When the witches and wizards are not merele tricked by the devil with various illusions, they are mere charlatans. The description of the practices of a certain woman widely rumored to make accurate predictions is scrutinised by our skeptic and concluded as cold reading, one of the first occurrences in history of this technique.

In the other pole of the spectrum, in his treatise constructed as a dialog between Archduke Sigismund of Austria and himself, Ulrich Molitoris makes claims of the vanity of magic and witchcraft in a more sensationalist manner. 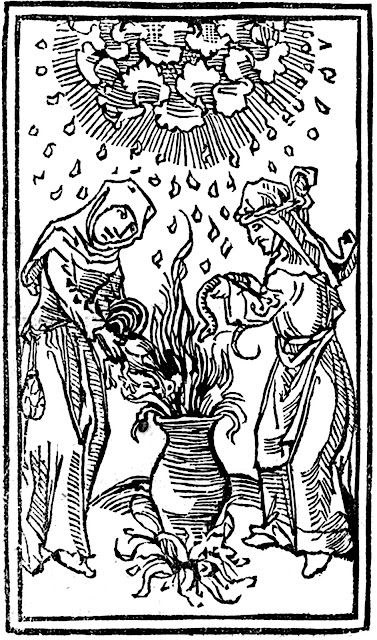 He quotes biblical passages, legends of saints and even fables or myths to make his point, much to the Archduke`s skepticism, who oftentimes concedes.
In some cases, such as the interactions between women and demons, he comes to even more complicated conclusions. When his patron inquites if the demons can copulate with mortal women, as many stories attested, including a chapter in Genesis, Molitoris rejects it stating that demons have no semen of their own. When his patron argues that some demonologists tell of demons having sex with men, gathering their seed and copulating with women, thus impregnating them, Molitoris argues that the Devil merely makes the woman think she is pregnant for nine months with "a swelling wind", then come time of birth, the devil steals a baby from some other woman in another part of the world and makes his consort think that it is her offspring. How can that occur? Unbaptised, thus vulnerable babies, of course. A delightful piece of logic of the times.

While Hartlieb`s logical and healthy-skeptical treatise circulated as a manuscript for a time and was forgotten, the sensationalist and well-illustrated treatise of Molitoris was widely published and distributed. With tragic consequences, oftentimes.

Richard Kieckhefer`s volume is a must-read for any history student and a must-have for any student of the history of magic and superstition. Not to mention psychologists.
Posted by Mihai Vârtejaru at 14:39 No comments:

This manuscript, brought to my attention by Daniel Clark if I`m not mistaken, caught my attention a long time ago when my palaeographic talents were nascent, mainly because of its magical diagrams, and did not pay much attention to it, but I believe it to be an important part of many puzzles.

Universitätsbibliothek Heidelberg, Cod. Pal. germ. 263 is fully digitised and the images are in public domain.  Although the quality is not as high as others, it is sufficient to be grounds for research, with a bit of adjustment.

The drawings presented in this article are raw, keeping the manuscript`s liniation. Once transcribed and reworked I plan to do a full restitution of the graphics at a higher resolution with clean background.

The writing is a late 15th century bastarda hand, very clean, constant and with little to no contractions or siglae, so a transcription should be fairly easy to produce.

This fragment is important in many ways

-it contains many unknown diagrams that have obviously had a wider diffusion, such as the triangle in 271v, which seems as this is the origin of the magical triangle included in the Florentine Seal of Jupiter.

-it contains (261r) the names of the angels of the 15 fixed stars, a detailed omitted from the Quindecum Stellis as far as I know, so presumably the seals we all know and love, included those from Agrippa, actually belong to them. 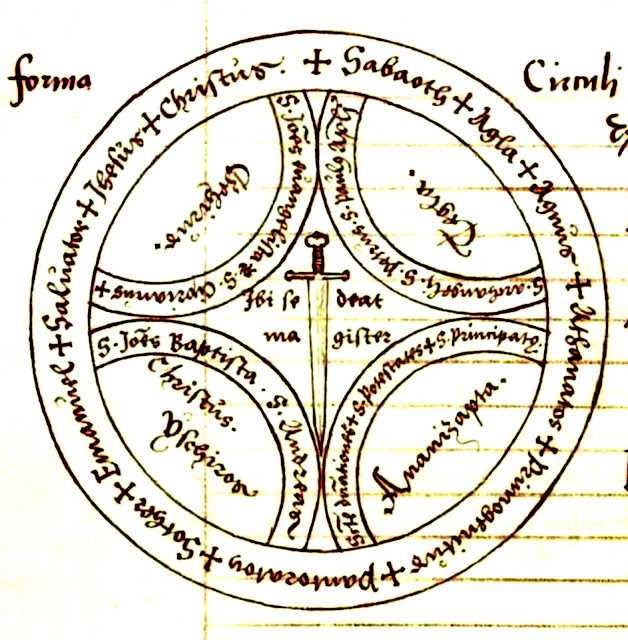 Characters for compelling a spirit to answer
265v

Sigils of the Planetary Spirits
270v 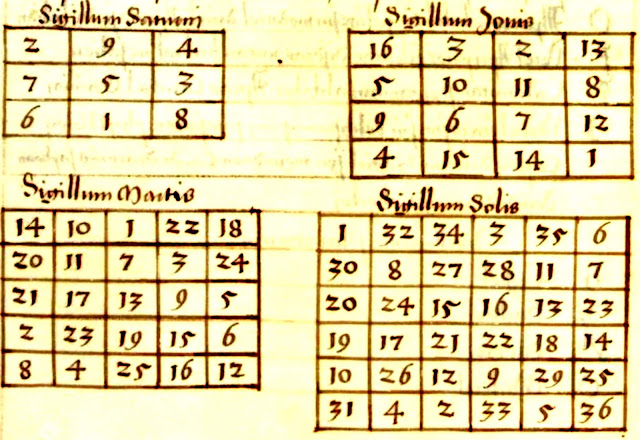 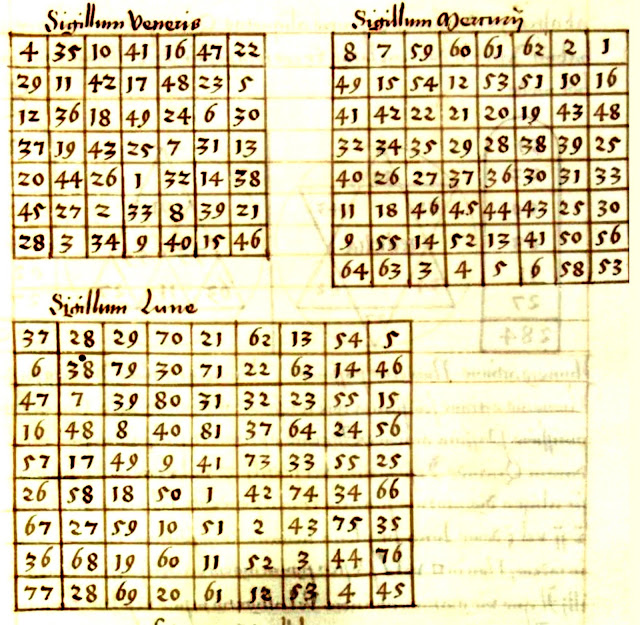 The seal of Amicables.
271v 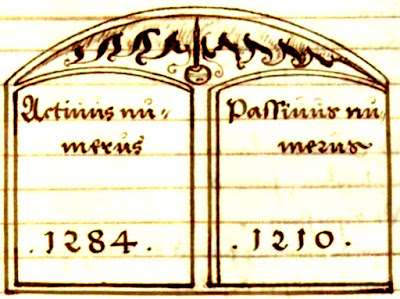 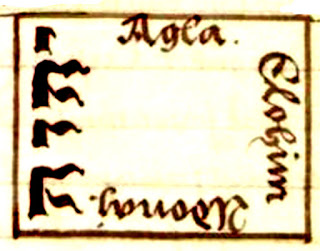 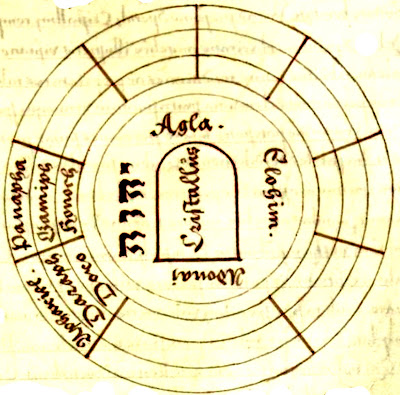 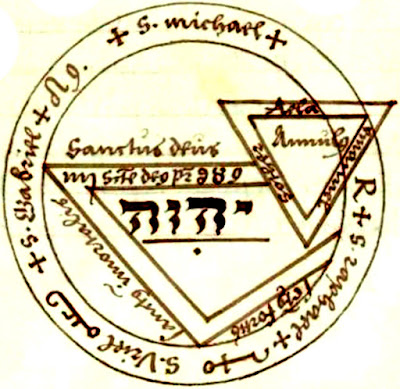 For a comprehensive synopsis of the contents I am greatly indebted to Dr. Karin Zimmermann (Universitätsbibliothek Heidelberg). Her full article can be found HERE.  The list was edited and updated by myself, and added English translations.


-De Consecratione Gladij. Of the consecration of the sword. (257v)


A brief presentation was published at OmegaMagick.

If you find this helpful, share it or consider becoming a patron, in order to keep this free resource going with as much new material as possible. Thank you.
Posted by Mihai Vârtejaru at 18:41 No comments: