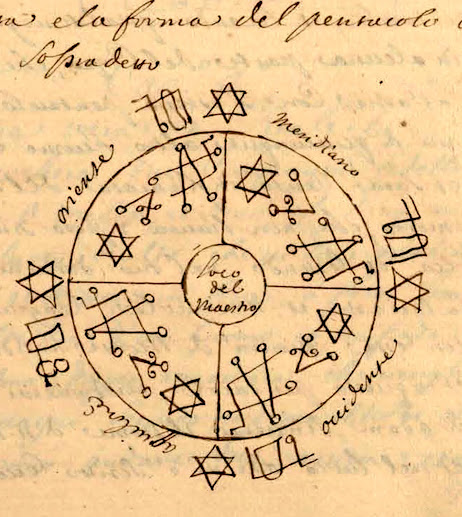 First of all, I would like to acknowledge the immense help and generosity of a man not mentioned enough: Daniel Clark. He edited and saved a vast collection and manuscripts and in some cases, payed a great deal to have some scanned, which were previously unknown to researchers. It is because of this particular friend that I am aware of the manuscript we will discuss below. He found it browsing through catalogues and payed to have it photographed, and later on, considered me the right man to share it with, for which I am greatly indebted.

Was dated by Herman Gollancz to about 1700 and published it in facsimile in 1917. It is the most known and circulated version of this work.

The British Library Manuscript
Or 14759 is part of the same Sefer Mafteach Shelomoh. According to the square and semi-cursive Sephardic script, it is dated to the 17th-18th centuries (1600-1799), which is quite the range. According to Rohtbacher, (op. cit. p.129) the original language of the work was Italian, without any doubt.
The Asterdam Manuscript
According to the same study (Rohtbacher, p.129), there is another manuscript of the SMS is Amsterdam, Bibliotheca Rosenthaliana  MS. Ros. 12.,  transcript dated to 1729 by Isaac Zekel ben Yidel Kohen Worms from a copy by Judah Perez in London. Since this copy is not known and since the Gollancz collection was in London, we might speculate weather this Perez copy could be inharited by Gollanz, or be an entirely different work.  Rohtbacher relates it corresponds to the Gollancz manuscript but seems to depend upon different exemplars. If you are looking for a well-put together account of Italian words kept in the SMS, Rohtbacher is a good place to start.
The Italian Manuscript
The manuscript we are studying has the call number msBF1608.S7, it s dated to circa 1850 and was acquired by the Library of  the University  St. Andrews at the sale of Dr. John Lee's library on 6 April 1861. I had no idea who this John Lee was, but thanks to Dan Harms and his endless generosity with resources, pointed me in the right direction: Dr. John Lee, Scottish academic, polymath and bibliophile, who dies in 1859 and seems to correspond closely to the man we`re after.
From my point of view, the dating of 1850 seems a bit late judging from the paleography, with such archaic features like U replacing the V and the apostrophe replacing the I. I would have guessed 18th century (1700-1799), but I m no expert. So I contacted two experts in Italian Vernacular scripts, Maddalena Modesti and Armando Petrucci, and am awaiting their reply, if any, to conclude the dating of the script.
The Sefer Mafteach Shelomoh is quite a colorful treatise, consisting in a mix of works of ceremonial and astral magic of diverse lengths. The longest is the Clavicula Solomonis proper, followed by extracts of Liber Juratus, Book of Raziel, the Heptameron or rather, the Elucidarium Nigromantiae and various small treatises such as Liber Bileth, the Images of Zoel and experiments of various origins.  As previously established by most researchers, chiefly Gershom Scholem, the Sefer Mafteach Shelomoh is not the original Hebrew work that spawned other editions, but rather a 17th or 18th translation of an Italian work.
My next post will be a full table of contents of the Italian version, compared side by side with Gollancz.    And once I have permission from the St. Andrews University Library, I will reproduce more drawings.
While the manuscript we are dealing now may be and may not be the direct source of the SMS, it is a more coherently organized work and it may be at least a later copy of the Italian original.
Illustration Study
In order to ascertain the dependency of one manuscript upon another, script, language and watermaks are used most commonly. But we have one tool more, namely comparing graphical elements that are common to two or more sources. It is impossible to have two identical drawings in two manuscripts, but oftentimes, slight changes to shape or slight overlooked similarities help us pinpoint what manuscripts are truly related.
The Operation of Simon Magus
Gollancz Version 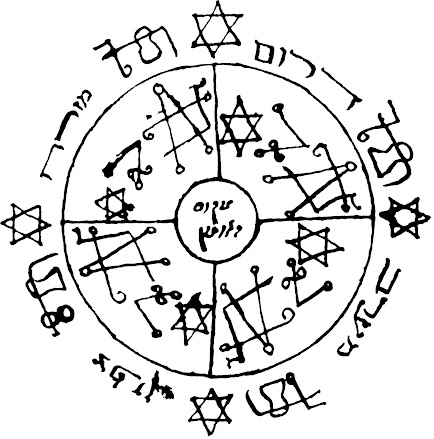 Gollancz  fol. 55v
The figure in Gollancz is a circle, centered around a smaller circle with the tag ”Place of the Master”, which are united by four cardinal lines. Each segment contains a seal, repeated four composed of three figures, to which we will refer to, from left to right, as the first character, the second character and the third character. The outer space contains a similar seal, composed of two characters bearing resemblance to the three, one of which (the hexagram) is placed cardinally. Between the seal and the cardinally placed star we have the Hebrew name of each direction. For easy identification, see the chart below.

Inspecting this chart and comparing the seals we find the following characteristics:
-The second character in A1, A2 and A3 face a cross bar terminated with circles, rendered in one scribal motion, while in A4 this. characteristic is reduced, for the sake of quickness, to a horizontal 8.
-The third character in A1, A2 and A4 feature two distict lines coming from the top circle. In A3, these are conjoined, one line that ascends and descends and is topped by a circle.
-The first character in B1, B2 and B3 begins with the same element (the backwards F figure), while in B4 contains a mistake presumably, an 8 figure.
-The first character in B2, B3 and B4 has a middle section of an hourglass round at the top and flat at the bottom, while in B1 this is rounded at both ends.
British Library Version 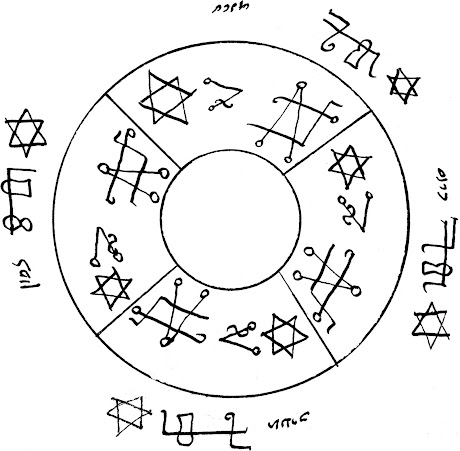 Fol.48r
Right away a few visible differences are apparent:
-The central circle is blank.
-The four lines are rotated 45 degrees, becoming now an X, displacing the names of the quadrants cardinally. The uppermost quadrant remains East.
-Only one hexagram is placed adjacent to the cusp of the quadrants, the others being distributed equally in a visual approximation.

-The second character in all A seals has a wavy line instead of the circled crossbar, much simpler even than Gollancz A4.
-The third character in A1, A2 and A4 feature two distict lines coming from the top circle. In A3, these are conjoined, one line that ascends and descends and is topped by a circle.
-The first character in B1, B2 and B3 begins with the same element (the backwards F figure), while in B4 contains a mistake presumably, an 8 figure.
-The first character in B2, B3 and B4 has a middle section of an hourglass round at the top and flat at the bottom, while in B1 is more of a disjointed, mirrored B.
-The second character in B1 is missing the superior point.
The Amsterdam Manuscript
The scan I used, provided freely online by the National Library of Israel, was a scan of the microfilm, so the image has serious bleed-throughs and was quite deficient in quality: 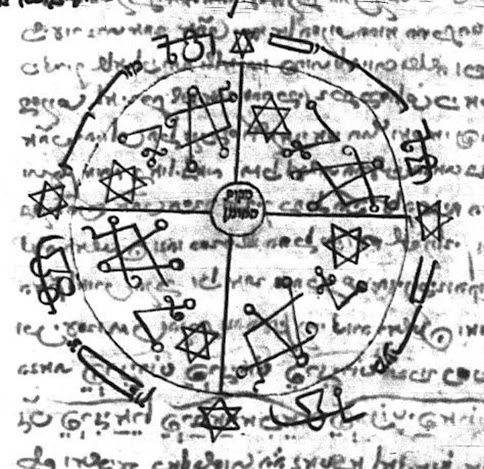 AMST.Ros12 fol 51r, unedited
For the sole purpose of this study I have restored the black ink and enhanced the quality of the details in order to better examine the relevant details of the seals. 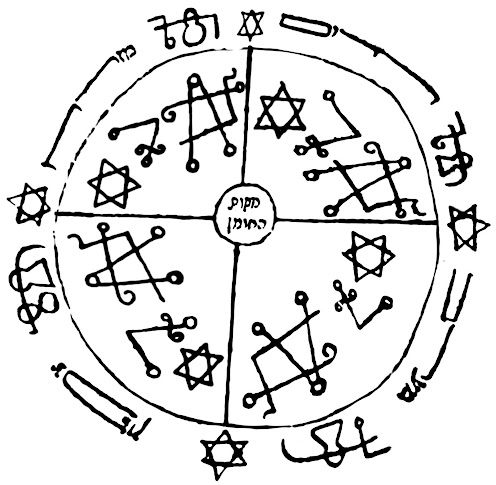 Overall, the layout is more akin to the Gollancz  then to the British Library, with the cardinally-oriented cusps and hexagrams and legenda in the middle reading ”Place of the Master”.
Once we isolate the seals, the following chart can be made:

-The second character in A1-A4 has the horizontal line with opposite circles.
- B4 contains the same recurring mistake, the 8-shape.
-B1 rounded at both ends.
St. Andrews Version 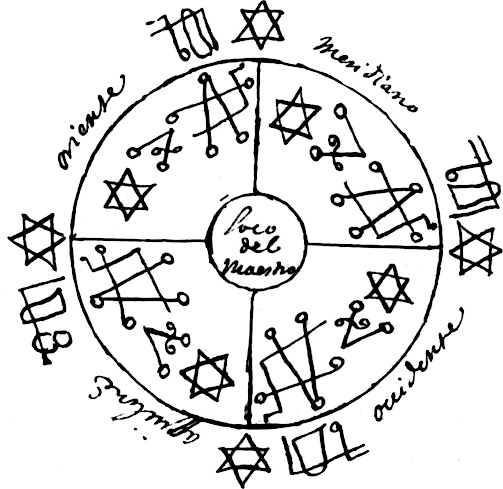 The traits are quite clear with this image: similarity to Gollancz and Amsterdam and dissimilarity to British Library, cardinal lines and hexagrams, central legenda reads Loco del Maestro (Place of the Master).

-Shockingly, the second character in A1-A4 has the horizontal line with opposite circles.
-Amazingly, B4 contains the same recurring mistake, the 8-shape.
-Breathtakingly, B1 is rounded at both ends.
My take on the dispersion of this work?
This veritable magical encyclopedia was penned somewhere in Italy in the sixth or seventeenth century.  Two direct copies of this are both Gollancz (1700) and St. Andrews. The presumable Judah Perez copy, if not identical to Gollancz, also uses this text. The Amsterdam copy from 1729 by Isaac Zekel is quite late in the career of this book, while the newest  version seems to be the British Library, that also includes supplimentary material. The path of this work, from Italy to the Lower Countries to England, is highly linked to the diffusion of the Shabbathaist movement. This is to be studied further.
Until we can find an even older Clavicle with similar structure, this version will serve to explore the Italian source of the SMS.

Digital Sources:
Amsterdam, Bibliotheca Rosenthaliana AMST.Ros.12
https://web.nli.org.il/sites/nli/english/digitallibrary/pages/viewer.aspx?presentorid=MANUSCRIPTS&docid=PNX_MANUSCRIPTS990001711750205171-2#|FL16696088
Gollancz, Herman: Sepher Maphteah Shelomoh
http://www.esotericarchives.com/gollancz/mafteahs.htm
London, British Library Manuscript Or 14759
http://www.bl.uk/manuscripts/Viewer.aspx?ref=or_14759_f001r
Printed Sources:
Gollancz, Herman: Sepher Maphteah Shelomoh, Teitan Press Facsimile, foreward by Stephen Skinner, 2008, copy 118/ 358
If you find this helpful, share it or consider becoming a patron, in order to keep this free resource going with as much new material as possible. Thank you.
My next Patreon Book will be ”Liber Bileth”, contained in this very manuscript. All minimum 5$ patrons will get it when announced.

Posted by Mihai Vârtejaru at 19:24