The Book of Pentacles: Folger V.b.26

The Folger V.b.26 was fully transcribed and published by Joseph Peterson and Dan Harms. The book does not contain the original drawings but rather modern reworkings from the brilliantly talented James R. Clark.   You can consult the original manuscript online on the Folger Library Website. Many thanks to both Dan Harms and Joseph Peterson for allowing me to quote their wonderful edition.

The 22  unnumbered figures can be found on pp.144-147 and seem to be the versions that served as a source for Robert Cross Smith, treated in my previous post regarding these seals in Wellcome 4639. 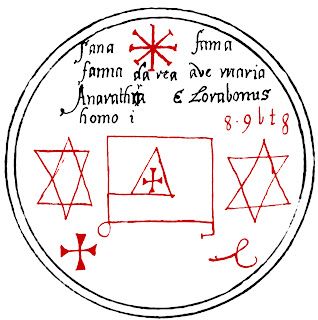 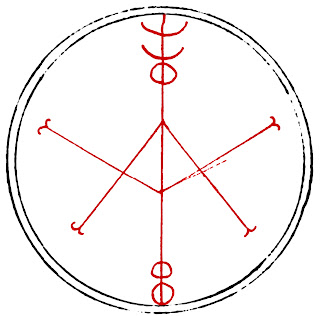 Fig.2
Hoc signum porta tecum et omnes erga te gaudebunt.
Carry this seal with you and everybody will be joyful to you. 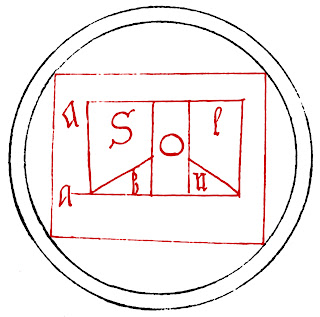 Fig.3
(No description. Smith takes that to mean it is the reverse side of figure 1.) 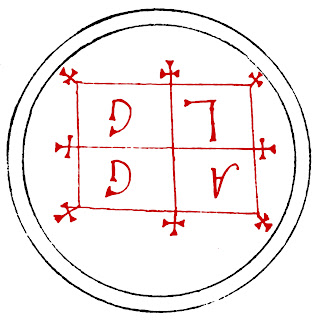 Fig.4
(No description. Obviously upside down, an element put right by Clark. Smith takes that to mean it is the reverse side of figure 2, but takes liberties with the letters order) 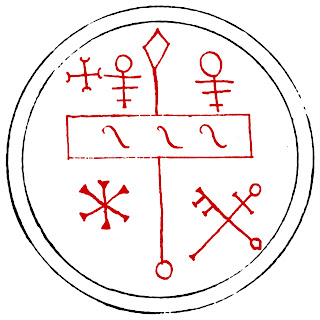 Fig.5
Hoc signum porta tecum et adversus te mala segnium possunt.
Carry this seal with you, and foes and evil will be slowed. 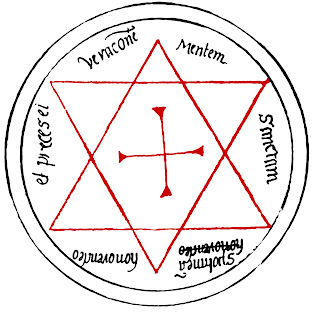 Fig.6
Hoc signum porta tecum et nullus habebit te odio sed omnibus placidis eris.
Carry this seal with you, and nobody will have hatred  towards you, but you will be pleasing to everyone. 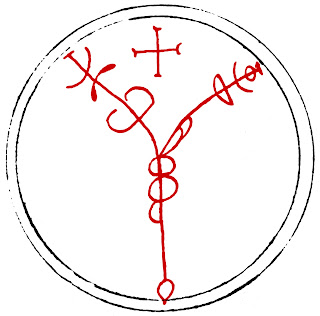 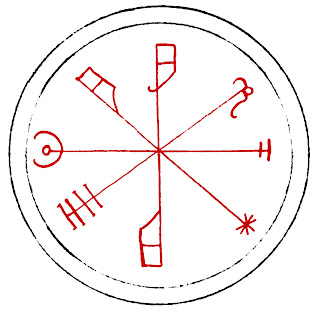 Fig.8
Quod non timeas Inimicum et deum timeas.
That you may not fear an enemy, but only fear God. 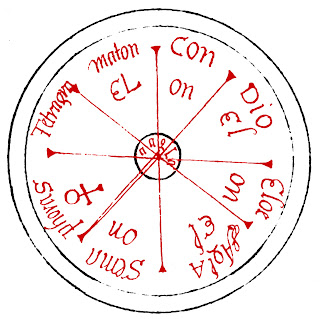 Fig.9
Hoc est Infallibe nomen dei quod Aaron in Monte tulit contra omnia pericula.
This is the infallible name of God, which Aaron brought (on the mountain) against all dangers. 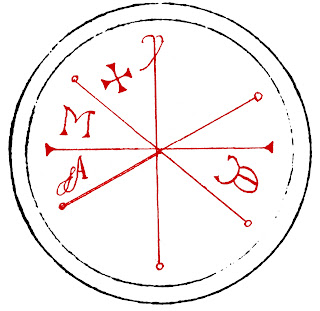 Fig.10
Hoc signum porta tecum et obediunt tibi omnes aerie et Infernales potestates.
Carry this seal with you and all aerial and infernal spirits will obey you.
(Clarks version innovates the serifed c-shape of the lower right seal into a half-moon.) 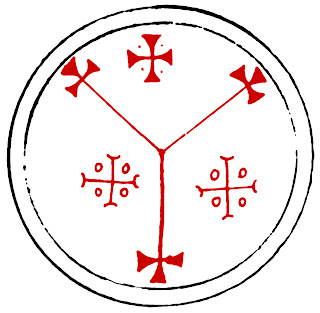 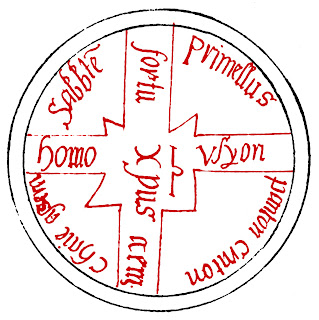 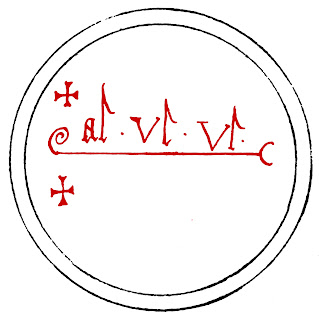 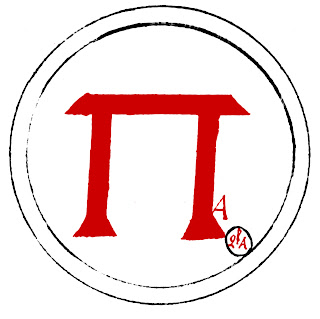 Fig.14
Hoc signum linguas malignantium mitigat, et amorem Indicit.
This seal will soften the tongues of the wicked, and reveals love.
(Smith renders the full body as azures and detattches the A from the figure and migrates towards a 4 shape) 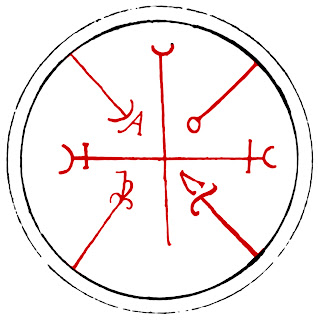 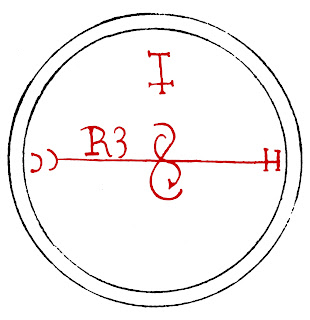 Fig.16
Per hoc signum obediunt omnes potestates et Infernales spiritus.
By this seal all powers and infernal spirits will obey. 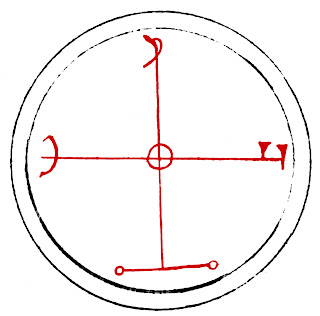 Fig.17
Quo die hoc signum videris ab omnie Impedimento et ab omnem malo liberis.
Whichever day you shall have seen this seal, you will be delivered from all evil.
(The upper P shape migrates into an y in Clarks version, and Cross has a similar shape, but with a closed loop) 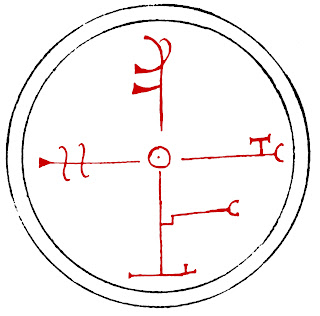 Fig.18
Per hoc signum obediunt omnes spiritus Infernales et potestates.
By this seal all infernal spirits and powers will obey. 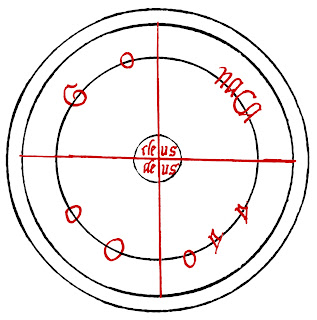 Fig.19
Hoc signum porta tecum in Bello et non timebis Inimicum tuum.
Carry this seal with you in war, and you will not fear your enemy. 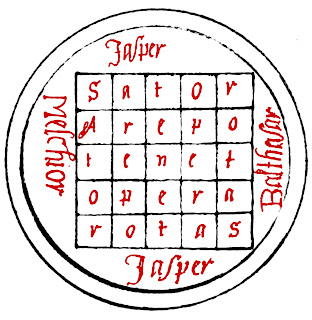 Fig.20
Hoc signum porta tecum et ab omni timore liberabis and against shott to be frether of.
Carry this seal with you, and you will be delivered from all fear, and against shot to be further off.
(An interesting instance where the compilers transcribed the Latin original and adds his own comment, evidentially modern, for the usage of the seal, in his own language. Smith omitts the latter. Even the fact that all letters are lower case, except the first S and A shows the direct lineage) 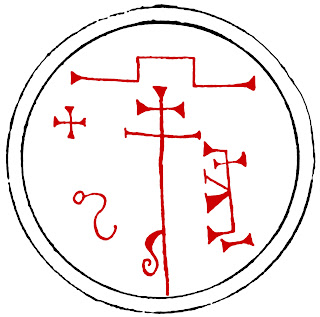 Fig.21
Contra omnem Matronis et Matrics.
Against all married women and mothers.(Sic)
(Smith rather rendrers it as beings against all evils of the Matrix, aka the womb, and to assist in pregnancy, which seems more logical) 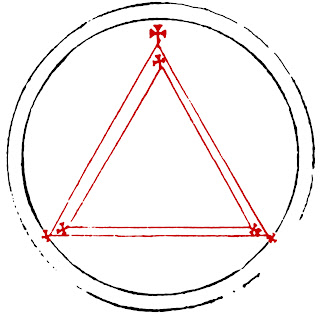 Fig.22
Sigillum Terrae.
Sigil of the earth.
(Smith copies this precisely, the two lower crosses surpassing the first circle, while the upper one remains within)
Conclusion: in the transmission of this very treatise, Wellcome 4639, penned by Robert Cross Smith, has a direct source in Folger V.b.26, which s known to have been owned by him.
If you find this helpful, share it or consider becoming a patron, in order to keep this free resource going with as much new material as possible. Thank you.
Posted by Mihai Vârtejaru at 22:03